Three concerts with ENTANGLED MUSIC ahead:

A feature about me and a truly enthusiastic and flattering review of my trio album ENTANGLED MUSIC in German jazz magazine JazzPodium! Very nice when someone digs so deeply into your music that he really understands and appreciates what you do, thanks to Alexander Schmitz. 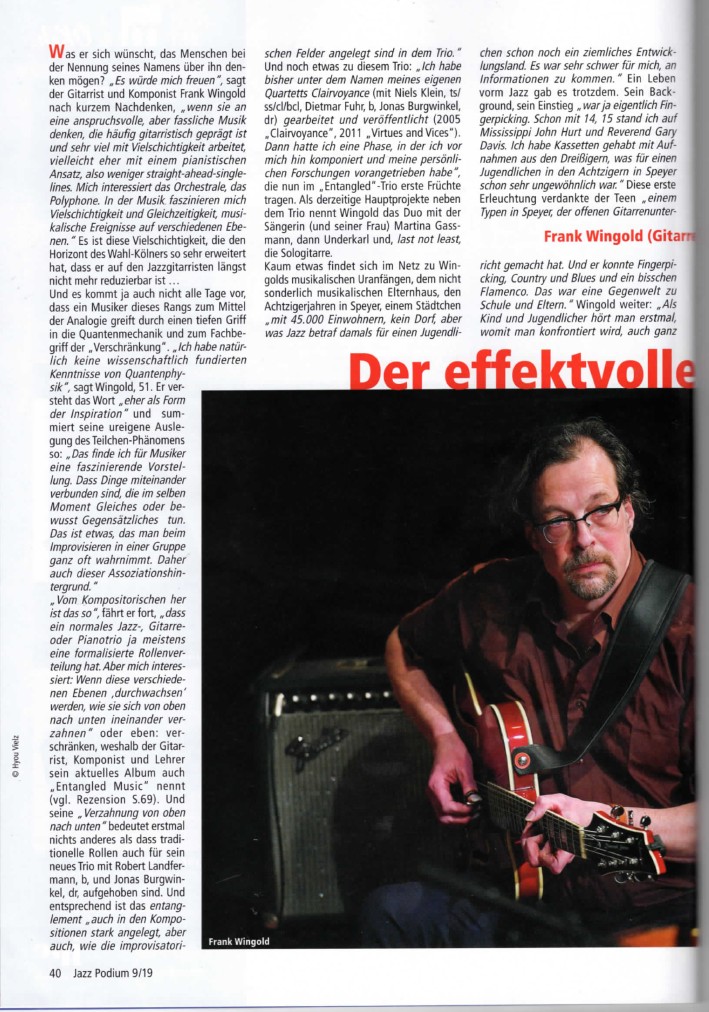 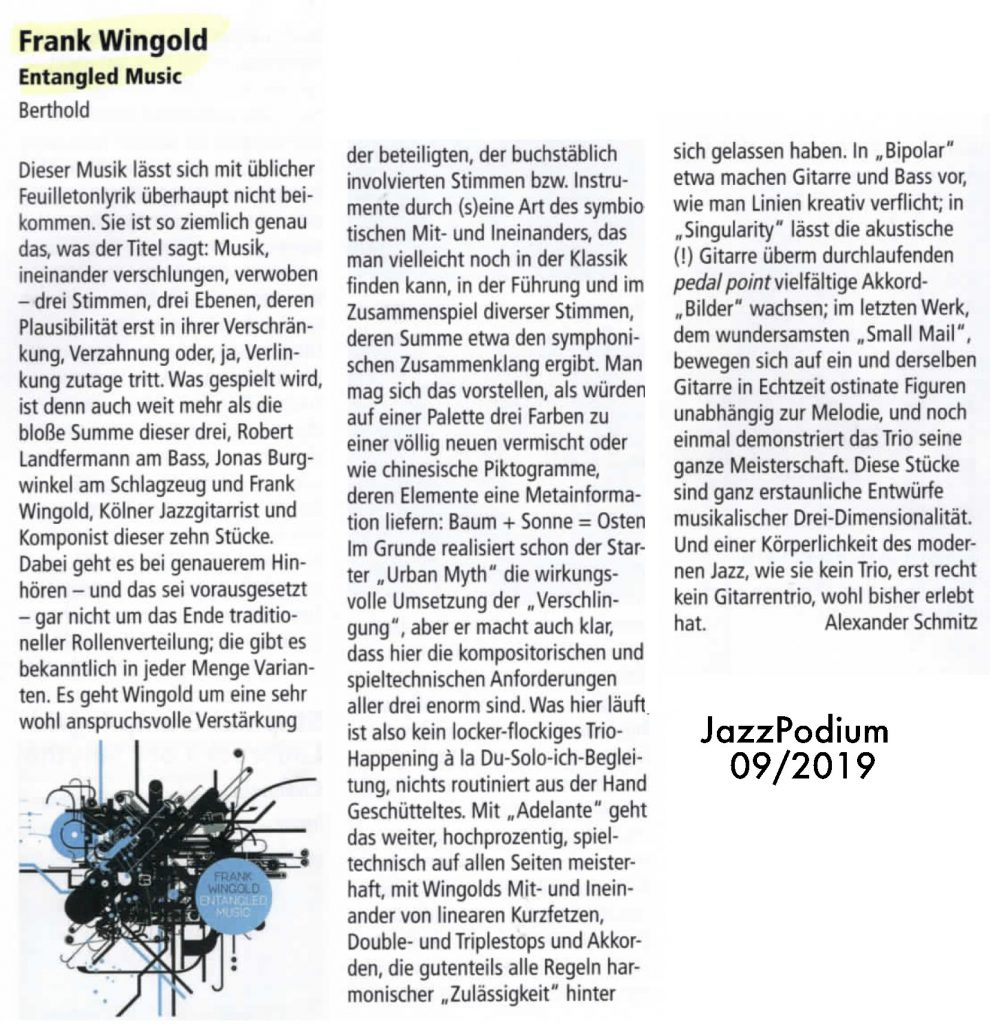 New video – live version of my new trio with Robert Landfermann and Jonas Burgwinkel from the new CD Entangled Music.

Thursday 3rd of May 9.00 p.m. at Deutschlandfunk my new CD ENTANGLED MUSIC will be presented in Jazzfacts Magazin by Odilo Clausnitzer. 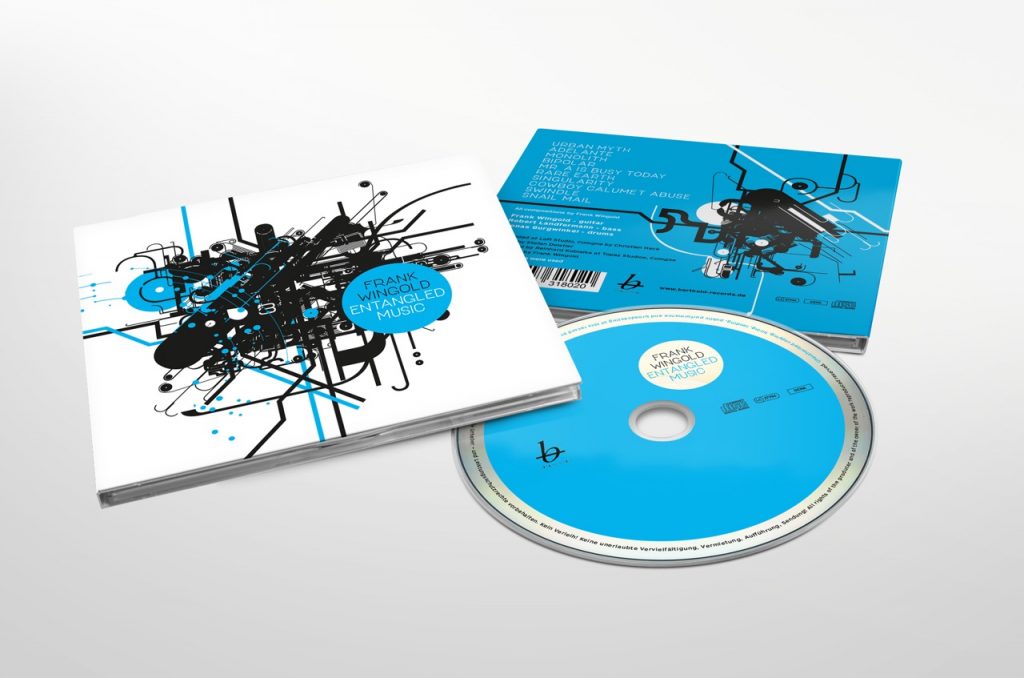 Dick Onstenk from the DUTCHBOPPER Blog released a long interview about my Dutch-German past and present. 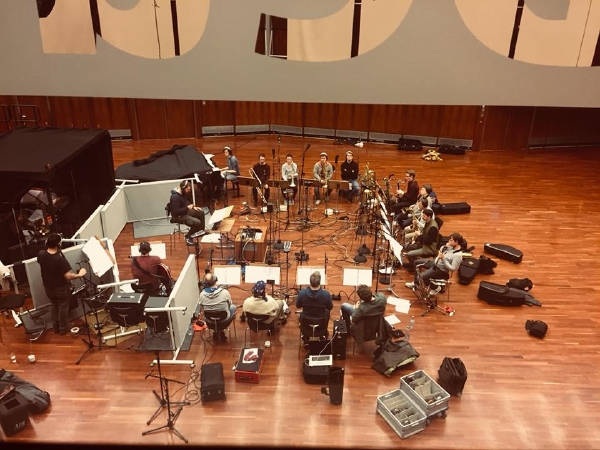 Sunday 5 june, 8 p.m. I will play a solo set at the Cologne Guitar Night at Altes Pfandhaus, Cologne. At the end there will be 1-2 duo tunes with singer Martina Gassmann.

In August I will be again teacher at the summer workshop JAZZINTY in Novo Mesto, Slovenia. One week of intensive lessons, Ensembles, jamming and hanging.

At 19 september I will play in Duo with Martina Gassmann at Kleiner Sendesaal of WDR in Cologne at the Kölner Musiknacht. From 7.00 to 7.45 p.m. we will present our new songs. You can listen to us in a live broadcast at WDR 3.

Two interesting concerts in the end of january:

On Soundcloud you can get an impression of the two pieces which I have written in 2012 and 2013 for the EOS Chamber Orchestra and guitar. They were both recorded and produced at Deutschlandfunk. 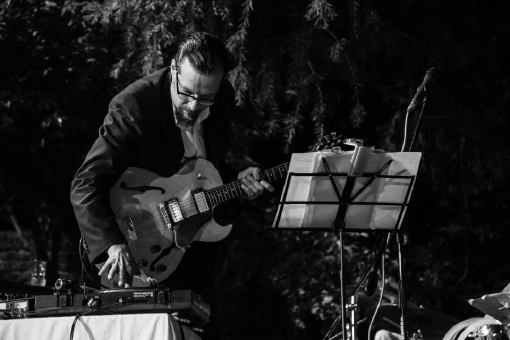 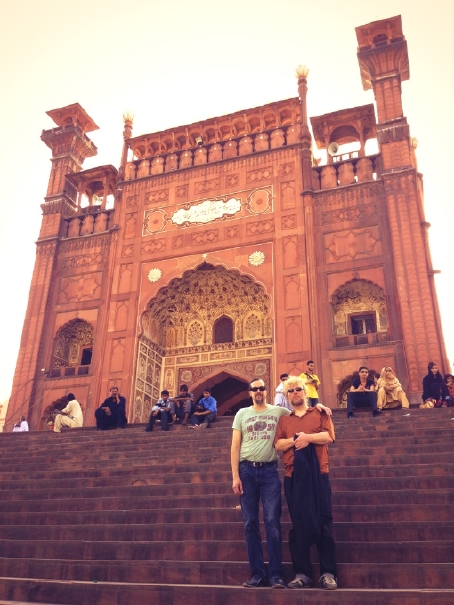 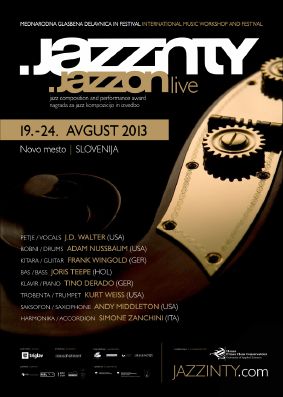 From 19th to 24th August 2013 I participate at a workshop in the gorgeous city Novo Mesto in Slowenia. I´m very proud to be part of such a high profile team of teachers with renown musicians like Adam Nussbaum and Andy Middleton. The fee is quite low and low-priced accomodation is provided. There are lessons, rehearsals, lectures, concerts and sessions the whole day and half of the night.

Here´s a booklet with the details.

This summer I composed a new piece for the EOS Chamber Orchestra plus guitar as soloist and improviser. It is inpired by the music of Hans Werner Henze who unfortunately died recently. „Witterungen“, that´s the title of the tune, was recorded in the end of last october at Deutschlandfunk. Now there will be two performances of the composition in Cologne, in which I will play the guitar part myself.

Another new CD, release 9 november 2012, ENJA
EFRAT ALONY – A kit für mending thoughts – a trio with Efrat Alony, voice/electronics, Oliver Leicht, clarinets/electronics and me. Wonderful crazy and spacy songs with a lot of electronic fun. From end of november on we are on release tour in Germany, Switzerland and Austria.
More infos, tourdates and soundbites here.

Finally UNDERKARL has a new release!
Homo Ludens, at Rent a Dog. This time exclusively own material composed by Sebastian Gramss, a lot of improvisations, very authentic recording, energy and playfulness, sound and textures.
The press reacts very enthusiastic, many good reviews at KulturSpiegel, Die Welt, Jazzthetic and others, plus already a lot of airplay. 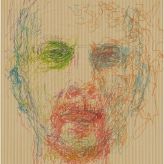 Just returned from an almost 3 weeks tour through Central America with UNDERKARL. Nicaragua, Honduras, Costa Rica and Mexico (San Luis Potosi and Mexico-City). A very intense time, great concerts in front of many highly interested and enthusiastic people plus inspiring workshops with local musicians. The highlight was an open-air- concert in Mexico-City in front or 5000 people. Amazing! 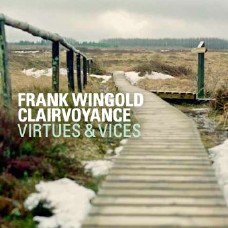 My quartet Clairvoyance releases finally the second CD `virtues & vices´ on Double Moon Records.
Again with Niels Klein (sax, cl), Dietmar Fuhr (bass) and Jonas Burgwinkel (drums). After the first CD which is already quite a while ago and many great concerts I´m proud to present the new work with nine brand new tunes of mine.

AGOG just returned from a one week tour in South Korea and Beijing, China. Here a few impressions of our concert at the very big and stunning Jarasum Festrival near to Seoul, South Korea:

Something completely different for a change: In September a new piece of mine for Chamber Orchestra and electric guitar was performed. In the project ADDITION2 (jazz musicians write for orchestra and interact as solists) the EOS Ensemble conducted by Susanne Blumenthal played next to my piece compositions of Niels Klein, Gabriel Perez and Florian Ross.
The dates: 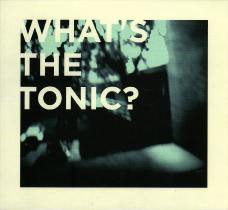 The CD of the german-dutch Quartett `What´s the Tonic?´is released. Johan Plomp plays bass, Miguel Martinez alto sax, Henk Zomer drums and I play acoustic and electric guitar. The compositions of Johan and Miguel are located somewhere between Free Bebop, Ornette Coleman and open, interactive tunes. The CD sounds really fine, very natural and has a nice room, and my Gibson ES-135 has been recorded better than ever (thanks Chris Weeda). We have three release concerts in the Netherlands: 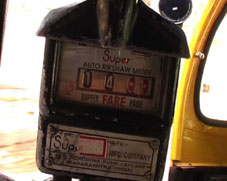 In november I will be in India again. Not with AGOG this time but with the „Black Dog Guitar Nights“. Four guitarists play solo, a few duos and a in the end one or two guitar quartet pieces. The other guitarists are Dylan Fowler (walisian folk), Dave Goodman (acoustic Blues, Singer-/Songwriter) and Eric Vaarzon Morell (Flamenco). So it´s not mainly a jazz event, a rather unique situation for me, very exciting, I´m looking foreward to do this. We will play in Delhi, Mumbai, Pune, Bangalore and Hyderabad, so we will have every day domestic flights, press conferences in the afternoon for the sponsors and concerts in the evening. I will report about the tour here.

Read my little travel report and see some pictures here.

A few photos from our concert in Stockwerk in Graz/Austria by Peter Pugar. More photos here: www.jazzimbild.at
Click on a picture to view bigger size
Thanks a lot to Peter Purgar. 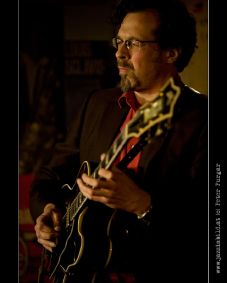 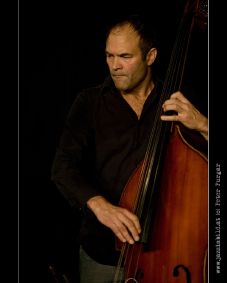 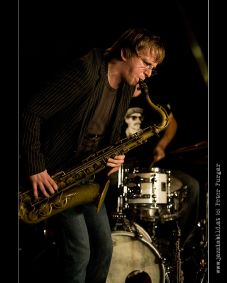 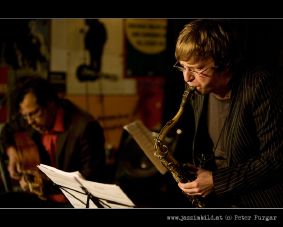 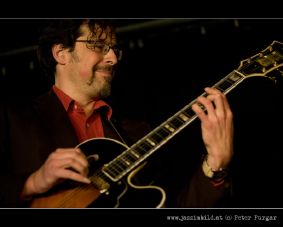 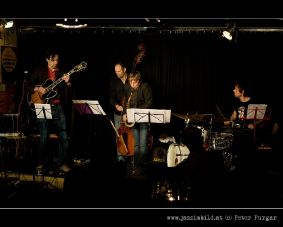 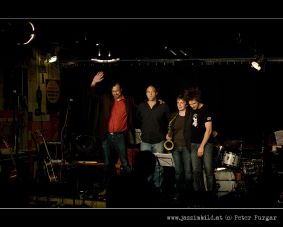 In the studio with my quartet Clairvoyance, news about the release will be posted here.

Agog was on tour in China – Beijing, Guangzhou und Shanghai. We had a couple of great and inspiring concerts in Clubs, concert halls and schools. What a fascinating country, very different from what I expected based on the way our media reports over China. The people are extremly straight, very hospitable and everywhere you can feel this very special sort of enthusiasm of an uprising nation. 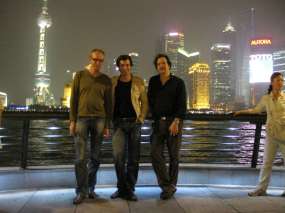 On the Agog site you can find photos, a videoclip and a travel report. Click here.

For those who understand German, nice reviews of Clairvoyance concerts in Biberach and Osnabrück.

From november 2009 on I will be professor for Jazzguitar at the FH Osnabrück. It´s a very good school with high-profile musicians as teachers, many from the very lively Cologne scene, a contemporary programm and a friendly atmosphere. Players who are interested in auditioning are welcome to contact me for a lesson.
More infomation here.

AGOG is touring in India again. We have concerts in Poona, Mumbai, New Delhi and Jaipur. We will report on the AGOG-Site.

As a guest of the `MusikFabrik´, a well-known Enseble for Contemporary Music, I will play several pieces by Frank Zappa, among otheres Black Page #1 and #2 and Echidna´s Arf. The concerts will be 12 march at the Konzerthaus Dortmund and 13 march at the Philharmonie Essen.

We had a few very nice and inspiring concerts with agog and the new program of the last CD `Some Frump Punk´in Amsterdam (Bimuis and Conservatory), Tilburg, Utrecht, Baarle-Nassau, Rotterdam and Eindhoven. The next step – the band is growing, that´s a great feeling.
On YouTube there´s a cute little Concertclip from the concert in Einhoven.

Release Concert of the CD `In the Backyards of our Souls´ by Martina Gassmann & Frank Wingold at
Kunsthaus Rhenania, Cologne on the convention photokina at the exhibition of the photographer Bernd Arnold,
26 septenber, 8.30 p.m.

Two new CD´s are released in the late summer 2008: The Duo-CD `In the backyards of our souls´ with singer Martina Gassmann plus guests at several pieces and the new AGOG-CD `Some Frump Punk´. A click on the cover opens the website. 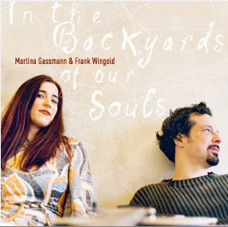 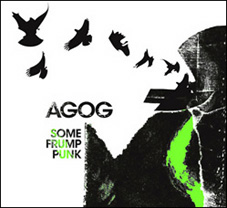 The India-Tour of agog was a big succes. Great and touching experience, lovely audience, beautiful country.
Check some photos here. 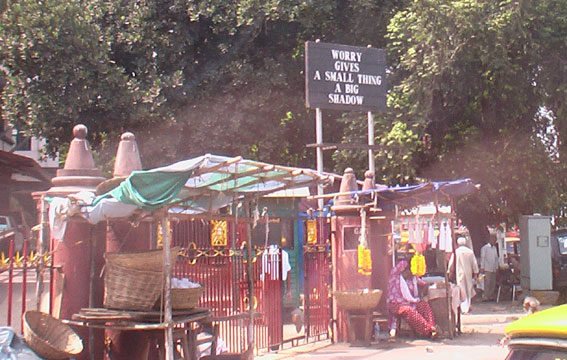 Finally I found the time to write something about my teaching experiences and add some worksheets. Just click on `Guitaristix´.

shraeng (Frank Wingold – Ralph Beerkircher) participates at the FreeJazz Theatre Piece „Siebenschmerzen'“ at the Theatre National Luxembourg. It will be performed at 19, 20 and 21 march in Luxembourg and at 19 and 20 april in Saarbrücken.

The new website of the Duo Martina Gassmann – Frank Wingold is online. Still only in German but you can listen to excerts of the upcoming CD `In the Backyards of our Soul´. Check site…

Since winter semester 07/08 it is possible to study Jazz at the Musikhochschule Saarbrücken, where I´m the guitar teacher. (Bachelor of Music/Jazz and Contemporary Music) Entry examinations take place twice a year shortly before the beginning of each semester. More information here.

Three new CD´s with my participation are released late summer 2007. Click on the covers to open the sites of the artist/band. 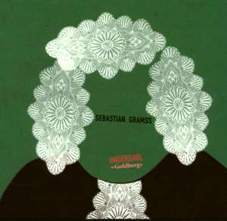 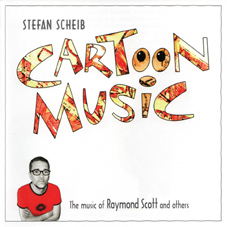 Anton Lovis Wingold is born. Mother and child are fine. We are very happy!

At 23rd of May Frank Wingold Clairvoyance plays at ARTheater in Cologne, Ehrenfeldgürtel 127.

MARCH 2006 – many new reviews and features

There are some recent reviews and features about Frank Wingold and the new releas `Clairvoyance´ in some german journals like Jazzthetik, Jazzpodium, Akustik Gitarre, Gitarre & Bass, Stadtrevue. (Click on the journal to see the original).

All pages which were available in German are online in English (except press reviews, I will try to include some translations in the near future). Guitaristix, Equipment and Guestbook will come soon in English and German.

The promotion of the new CD `Clairvoyance´ has just started, so here´s the brand new website. Some sites are still missing but they will come in the next weeks.

On september 15th 2005 Frank Wingold´s new CD `Clairvoyance´ with Niels Klein (sax, cl), Dietmar Fuhr (b) and Jonas Burgwinkel (dr) will be released. With nine new compositions and a for Wingold rather unusual warm and acoustic sound this CD represents his unique and unorthodox view of the jazz tradition. Click here  for more information and here for sound samples.

In spring 2005 agog started the new project `agog plays radiohead´ with Jozef Dumoulin (piano & rhodes) and Jasper Blom (saxophone & electronics). The quintet will play pieces and parts of the british band Radiohead. No covers but a lively and very personal approach to the music. In May ’05 they did do a try-out tour with this program through the Netherlands. For details check the agog website.

In August 2004 the new agog CD `Meltdown´ in collaboration with the dutch string quartet ZAPP was released. It was be presented at 18th of April at the MusikTriennale Cologne, in may/june agog/zapp tours in the Netherlands.For details check the agog website.

We are glad to announce that we finally made it: after the semi-final in the Paradiso/Amsterdam the jury choose us for the winner of the Dutch Jazz Competition 2002.
With that we won a tour of about 20 concerts this fall, studio recordings, international promotion and money which we will use for the next production.
Joost Lijbaart won the prize for the best soloist.
Thanks to everyone who supported us.